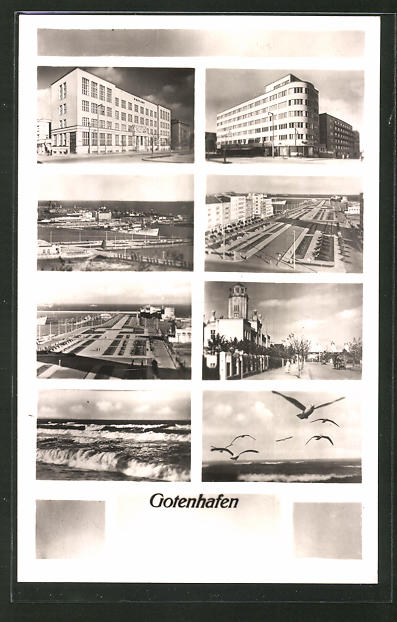 Walking around Gdynia, hard to believe today, that at the beginning of the 20th century it was just a small fishing village, not much different from other Baltic settlements. It is the youngest part of the Tri-City and looks like a typical port city: the main streets of the old part of Gdynia run towards the shores of the Bay of Gdańsk, and central, representative street 10 February leads to the South Pier, where sailors on voyages around the world were said goodbye and greeted. In Gdynia, you can see real ocean ships and warships up close. Maritime universities and professional sailing clubs are located here.

Gdynia is spacious and luminous, even on cloudy days, it shines with the whiteness of the houses, streets and quays. It is distinguished from other cities by an interesting urban layout. Buildings in the center, which was established in the years 20. i 30., has been preserved as one of the most interesting, unique modernist architectures. There are no monuments as such, apart from the souvenirs from the time when the city and the port were built in the years 20., which have been collected, among others, in the Museum of the City of Gdynia. Visiting the center, a different time scale should be adopted than when visiting Gdańsk, because despite the 70 years of "urban experience", Gdynia is relatively young. Therefore, the boards with the inscription "monument” on modernist buildings, completely the same, as in 15th-century tenement houses in Gdańsk or Kraków – you just have to respect and accept this "historicity."”. The lack of real monuments is compensated by the beautiful surroundings of the Kępa Redłowska and Orłów Reserve, constituting an undeniable tourist asset of Gdynia. North and west of Morska Street, which is an extension of the "trans-Tri-city" communication artery, Modern housing estates and nice clusters of single-family houses are emerging. Southern districts of the city - Rłowowo and Orłowo – they are a smooth transition from the big city of Gdynia to the quiet and green Sopot. The most pleasant places in Gdynia, outside the residential districts and the quietness of Kamienna Góra, are Kościuszko Square and Nowowiejski Boulevard, where you can take a walk, sit and look at the Bay of Gdańsk.

Recently, Gdynia has made a significant contribution to culture thanks to the popular Musical Theater, which is worth visiting not only because of musicals (Fiddler on the Roof, A man from La Mancha or Les Miséra), but also for this, to see its strange shape, in which there is not a single right angle.

Orientation in the city

Main Railway Station where there is also a SKM stop, was established in 1926, however, it was completely destroyed during the war. It was rebuilt (according to the new design) in the early years 50. Its creator designed several other buildings in the city and hence the illusion of "uniformity" of this part of the city's buildings. The station is at pl. Konstytucji and at ul. Dworcowa. Two main streets depart from it, forming the center on the east-west axis: 10 February, and Starowiejska.

The street 10 February, whose name commemorates Poland's wedding to the sea, it is the most frequented route leading to Kościuszko Square and to the South Pier. It is also a "tourist trail", where the most important city buildings are located. W 1904 r., when it was narrow and dusty, it was called Kurhausallee – from the name of the spa house, once standing on the site of Kościuszko Square. Buildings at ul. 10 February is distinguished by modernist architecture, represented by the building at no. 24 erected in 1934 r. It belongs to the Polish Ocean Lines and looks like a huge white ship with a rounded stern. An easily accessible interior presenting the interwar style is the interior of the Main Post Office at the intersection of the streets 10 February and Władysław IV. A new one rises in front of the post office, a department store with an internal passage modeled on modernist buildings, looking like a marina with a ship moored next to it.

Kościuszko Square and its surroundings

Extension of ul. 10 Lutego has a wide recreational Kościuszko Square. The northern and southern frontages of the square, built-up houses, form a wide line, which leads to the alley of the Unification – South Pier. Visible from the sea from the perspective of the Kościuszko Square entering the port, it shines with white houses and that is why Gdynia bears the nickname of "the bright city by the bay". Despite the large size of the pier, the distances are easily and quickly covered.

Pages: 1 2
This entry was posted in Information and tagged Gdynia, guide. Bookmark the permalink.