Sopot – By the sea 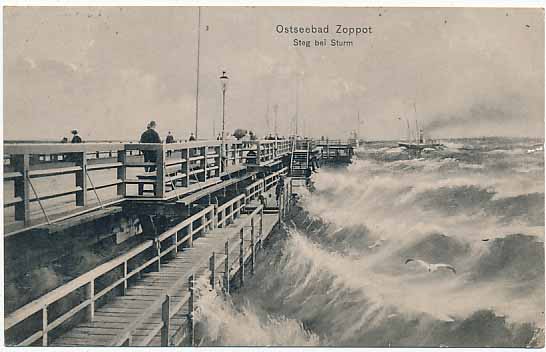 Bohaterów Monte Cassino Street, developed with Art Nouveau tenement houses from the 19th and early 20th centuries., overlooks the Zdrojowy Square and the Kuracyjny Square, where before the war there was a health resort with a casino. However, the most important place in the square is the entrance to the pier. Wooden rails and benches painted white and blue are reminiscent of stripes on the costumes of men from the belle epoque or the Greek flag. Lamps illuminating the pier create beautiful illumination after dark, attracting lovers with equal success and… swarms of mosquitoes.

The first pier was built in 1817 r. Russians as a haven for warships. Unfortunately, retreating – they burned her. Seeing the real need, Haffner w 1824 r. built a short footbridge. W 1827 r. the length of the pier was approx. 52 m, and the width is approx. 2,2 m. After numerous rebuilds and improvements, today's appearance was given to the St. 1928 r. Since then, it has also served as a harbor for boats, which local fishermen used to transport patients around the Bay of Gdańsk.

It is certainly the most famous object in Sopot. Wooden pier approx. 516 m, with side, ponadstumetrową ostrogą – one of the longest in Europe – it also serves as a haven for sailboats and ships of the white fleet. Without a walk on the pier, your stay in Sopot is invalid (in the season, admission from. 8.00-22.00 costs on weekdays 1 PLN, a w nd. and holidays – 2 PLN). Comfortable benches are placed along the wide wooden walking path, and at the end there is a small bar and a viewpoint, from which for 1 PLN you can look through binoculars. To the east you can see Westerplatte and the Northern Port, in the west of Gdynia, and in the north – Hel peninsula. When the sea is rough, Foaming waves crash against the piles supporting the pier, giving the walkers a thrill. Have to admit, that it is usually not difficult to get a strong impression on the pier, because it blows quite strongly even in nice weather. Sometimes local youths, counting on a couple of brands, they jump to the delight of Western tourists from the railing of the pier into the sea, regardless of the cold and the waves.

There is a picturesque panorama of Sopot from the end of the pier, with the dominant shape of the Grand Hotel. An inseparable element of the landscape are the dignified swans swimming by the beach and screaming gulls rising and falling.

Going for a walk, it is worth taking some bread or pearl barley with you (the package costs 1 PLN), to feed the birds. Of course, out of the summer season, because when the water temperature rises above 18 ° C, around the pier, "golden youth" rages on noisy water scooters. Occasional performances of music bands take place on the pier – rock and alternative bands play here during the International Sopot Festivals.

On the south side, a picturesque complex of low buildings with a characteristic tower adjoins the Cure Square, which houses the Balneology Department and the Rheumatology Hospital, facilities built according to the design of Paul Puchmuller in the years 1903-1904 on the site of the old baths. The bathing facility attracts attention with its round turrets and a wide roof. At the top of the portal above the main entrance, between two non-human figures carved in stone, neither are the watersheds, there is the coat of arms of Sopot: a white gull taking flight with a fish in its paws, against the background of three towers. In high season too 1,50 PLN, you can climb the tower, from where there is a view of the city, sea, the beach and people lounging on it.

Before Haffner built the village of 1823 r. modern bathing facility, there was an earlier one in Sopot, with 1819 r., which the owner of the local mansion built for himself, C.Ch. Wagner. This "prototype" of the balneological facility had two wooden bathtubs and one coeducational changing room. Haffner bet 6 cabin, shower room, lounging room, waiting room and boiler room. The bathtubs were made of earthenware and tin, then from copper. Cold and warm sea water was piped to them. The essence of the treatment consisted in the appropriate dosage of water baths at the right temperature – in bathtubs or in the sea – as directed by your doctor. The beaches are open at scheduled times, and the observance of order was supervised by a gendarme specially paid by the health resort, especially sensitive to voyeurs. And there was something to admire: ladies basked in hats on their heads, in long tunics and puffy reforms, and the gentlemen in cross-striped bathing suits. The building happily survived the war and the liberation, and then miraculously avoided being transformed into a "socialist" laundry for the Tri-City. Today it is administered by the Rheumatology Hospital.

Pages: 1 2 3
This entry was posted in Information and tagged guide, Sopot. Bookmark the permalink.