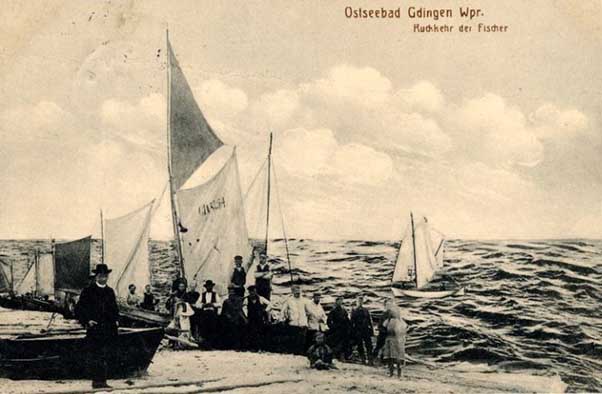 Already in the period 4000-1700 years BC. people lived in the area of ​​today's Gdynia, after which the working tools have survived (the hatchet and the stone arrowhead can be seen at the Gdańsk ethnographic museum) and cemeteries found near Kępa Oksywska and Redłowska. W VII and VIII w. p.n.e. subsequent generations built defensive settlements in Oksywie and Obłuże. However, only a few hundred years later, w 1253 r., the name of the village was recorded for the first time, which sounded from the Latin Gdinam. The root "gd" in the Old Western language meant mud, swamp, standing water. In ibid 1253 r. the village was part of the Oksywie parish, which also belonged to Witomino, I will, Pogórze and Redłowo, which are currently districts of Gdynia. For centuries, Oksywie was a much more important village (from Scandinavian oxihoved – head of an ox), with its own marina and a parish church.

Location privilege and the right to catch fish (4 boats, mostly tracks) received Gdynia in 1379 r. at the hands of the Gdańsk commander. A few years after this fact, it came under the possession of the Carthusian monastery in Kartuzy. With time, the fishing village of Gdynia developed and gained importance. W 1414 r. at today's ul. Portowa, the first inn was established - a meeting place for fishermen and a social and commercial center. Other inns – in Chyloni, Redłowo, Grabówku i Oksywiu – otwarto w XIV i XV w. After the Thirteen Years' War, Gdynia and Pomerania entered Poland as part of Royal Prussia. The village leader was the most important person, exercising power on behalf of the feudal lord. As part of his salary, he was able to catch any quantity of fish in the Bay of Gdańsk due to his office. Down in the hierarchy there were demons, that is, a wealthy group of villagers, having no less than one field of land. W XVI w. lived in Gdynia 8 bastards, 4 farmers, 4 bailiffs and 1 innkeeper. Staying in 1583 r. in the village, the church inspector noted only two Protestants, other dissenters moved to Redłowo, where they forcibly hijacked the Catholic Church. Thanks to trade, Gdynia was already in contact with the world in the Middle Ages. A trail led from Kartuzy through forests to Gdynia, which carried goods to the sea, to load them onto departing ships. This trail crossed another, running from Gdańsk to Puck, Wejherowa and further north. Robbers were an inseparable element of the trade route, who prowled in the forests of Kępa Redłowska, attacking merchants and travelers.

W 1634 r. political talks with the participation of the Grand Hetman of the Crown Stanisław Koniecpolski and the royal engineer Jan Pleitner took place in Gdynia. On the order of the Polish king Władysław IV, they were to build a war port independent from Gdańsk (Pleitner's measurements were precise enough, that the modern port was located in a place chosen by him at that time). As a result, however, it is on Hel, and not Gdynia, the military ports of Władysławowo and Kazimierzowo were established. During the siege of Gdańsk by the Russians, St. 1734 r., Gdynia was burnt down. As a result of the first partition of 1772 r. fell to the Prussians, which fiercely tried to fight her resolutely Polish character; the overwhelming majority of inhabitants were of Kashubian origin and supported Poland. The invaders tried to cut off the Poles from the sea, their sole source of income, refusing e.g.. permission to build a fishing harbor. W 1822 r. a dirt road from Gdańsk was brought here, which facilitated communication and transport, a 50 years later, the Gdańsk-Gdynia-Koszalin railway line was built.

At the beginning of the 20th century. Gdynia had a chance to become a resort like Sopot: the fishing harbor was expanded, the first holiday homes were built, holidaymakers began to come in summer, mainly Poles. After the liberation of 1919 r. The first Polish mayor of Gdynia was elected – Jan Radtke. Under the terms of the Treaty of Versailles, Poland received 140 km of coast, So the authorities decided to build a port. From now on, or more precisely from 1920 r., the modern history of the city dates back. The young Polish state needed an independent port very much. The port of Gdańsk, which was not very important for the German economy, was the only one available for Poland, constituting an excellent bargaining chip for the German authorities in relations with the Republic of Poland. To use it, the Polish government was forced to accept the exorbitant conditions imposed by the Germans.

10 II 1920 r. General Józef Haller, with two platinum rings donated by the Gdańsk Polonia, married Poland to the Baltic Sea in Puck, and in November this year, Tadeusz Wenda developed a port design. Its construction began in 1922 r., and after another 4 Over the years, the village of Gdynia was granted the status of a city and developed dynamically until the outbreak of the war, gaining the title of the most modern city in Poland. W 1935 r. neighboring villages were added to Gdynia: Foothills, Redłowo, Cisowa and Forest Plots. W V 1936 r. the city counted 83 thousand. residents, and in December of the same year – already 102 thousand. Five days before the outbreak of World War II, Jan Kiepura gave a concert at Grunwaldzki Square, and the proceeds were allocated to the Maritime Defense Fund. W 1939 r. the city was occupied by the Germans and together with the port and shipyard they transformed it into a repair base for warships and submarines. The effects of the hostilities resulted in severe losses and destruction. W 1945 r. 74 thousand. of residents began their lives anew. Nowadays, Gdynia is still one of the most important and most modern Baltic ports and is one of the largest Polish cities.

This entry was posted in Information and tagged Gdynia, guide. Bookmark the permalink.