Gdansk – South of the National Museum 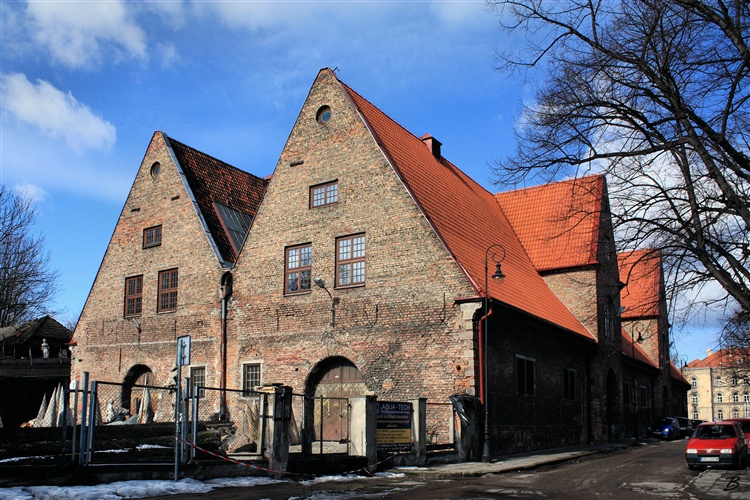 South of the National Museum

Heading along Rzeznicka Street south of the museum, you can walk to the White Tower (or the White Tower), standing at the intersection of Augustyńskiego and Pod Zrębem Streets. It was built between 1460-1461, but it was never a strategic object. Dziś mieści się tam siedziba klubu wysokogórskiego i sklep rowerowy. Cylindrical, The white-painted tower resembles, that here we are entering a partially preserved area, southern fortifications of Gdańsk.

In the middle of Wałowy Square, just south of the White Tower, the inconspicuous Small Armory stands on the right, which only in name resembles its big "sister” from Tkacka Street. It was erected in the years 1643-1645 by Jan Strakowski as a warehouse for heavy cannons and mortars for nearby forts. Today, you can only see the building, renovated after the war, from the outside. In the middle, the Academy of Fine Arts in Gdańsk was at home

Not far away from here, on the left, behind Wałowy Square, there is the Lowland Gate with 1626 r. Squeezed between the bastions of Żubr and Gertrude, is a restrained building with a solid granite silhouette. Continuously used, for three centuries it has been closing and opening the passage in the rampart of the bastions. Crossing the Lowland Gate gives you the opportunity to enjoy the picturesque southern views, lowland (just!) outskirts of the city. On the right, that is, on the west side of the gate, there is a small hill called Gertrude's Bastion, which can be climbed by a gentle climb from the east.

One of the builders of the fortification line, surrounding the Old Suburb and Dolne Miasto with an arc, there was a Dutch engineer named Wie-be. For earthen bastions, which to this day rise in the form of low hills with old names: Gertruda, Wisent, Wilk, Jump, Bear and Rabbit, Wiebe used the land obtained from the nearby Biskupia Górka, located, just like today, west of Gertrude's Bastion. In order to transport heaps of earth, he built an ingenious device, operating as a cable car, which at that time was an extraordinary innovation. The line ran from Biskupia Górka to Gertrude's Bastion.

Grodza Kamienna Street runs eastwards from the Gertrude Bastion, next to the Low Gate, which starts right at the gate and leads to the Stone Lock. The latter can also be reached, going east along the path that runs along the very shore of the Motlawa River. Perhaps the association of the lock with the castles on the Loire will seem excessive, however, this stone structure has the irresistible charm of the place, where stone and water create a romantic synthesis. Four strained by time, round turrets topped with stone spheres stand on stone ramparts. The waters of the Motława River and the coastal greenery create a charming setting for the whole. If not for awareness, it's just a river lock, the place would seem to be a remnant of a fortified castle – unfortunately very neglected.

The lock was built at a rapid pace for those times, in years 1619-1632 according to the design of the Dutch: Wilhelma Jansena, Benniga i Adriana Olbrantza. The facility performed serious tasks: it regulated the water level in the inner city riverbeds of the Motława River and in fortification ditches, and in the event of a siege, he could flood Żuławy (that is, besieging positions). It also withstood the pressure of sea water during heavy storms. The direction of the water flow was determined by two stone bulkheads, on which stood the cylindrical towers known as the Four Maidens, because, just like virgins, were to be unavailable.

From the Kamienna Lock, you can return to the center the same way, or go on a slightly longer walking route along the Motława shore towards the north, to the place, where, at the Milk Stags, the Long Gardens meet the Granary Island. The route goes along Dobra Street, which turns into Kamienna Grobla Street, a ta z kolei – w ul. Sheds. The road invariably stretches along the river, and the azimuth are Milk Jars (from this side presenting themselves in all their glory) and the towers of the Main City. The buildings that you pass on the right belong to the so-called Lower Town, which, similarly to the Osiek regions, it was a poor district.