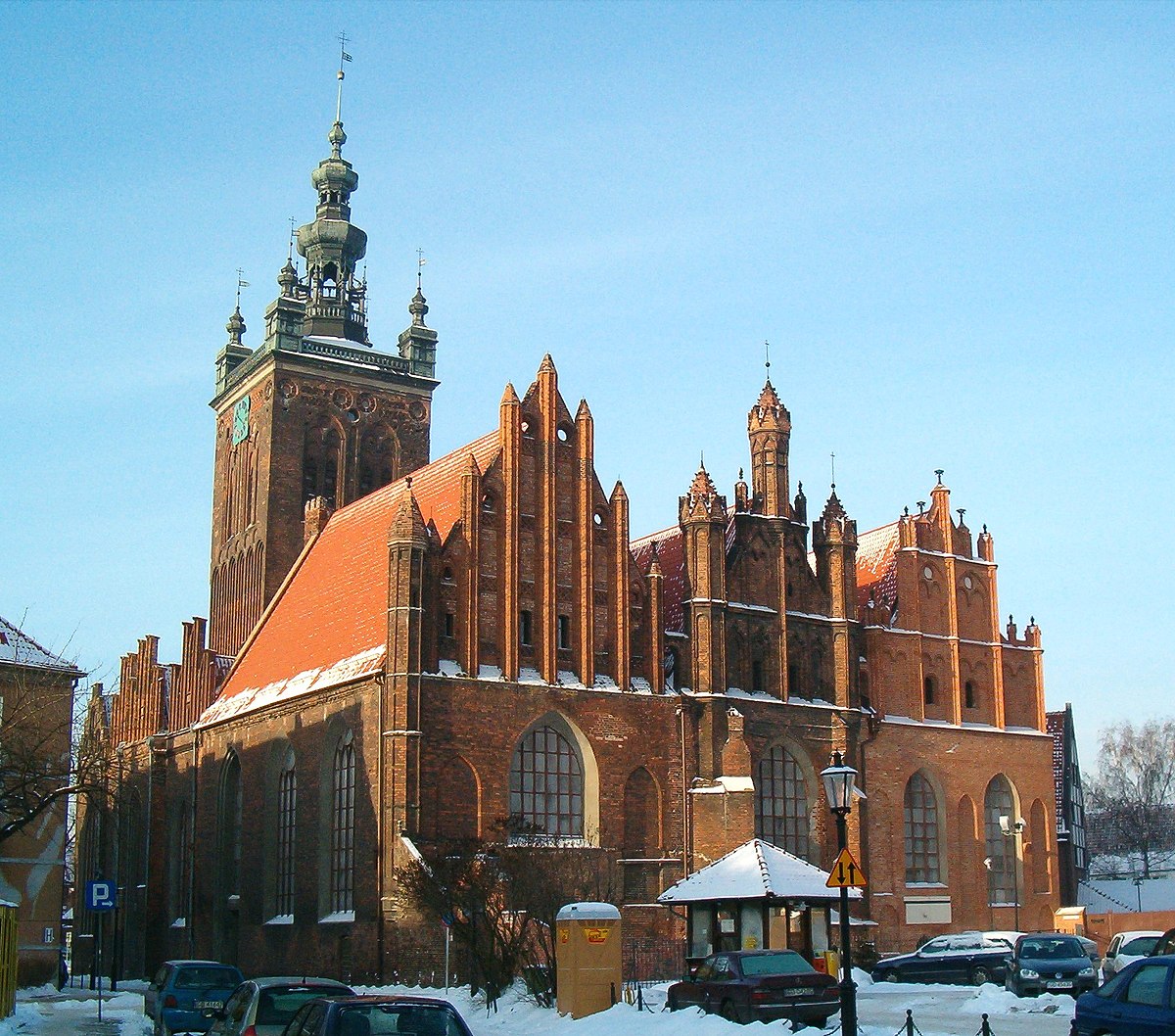 No great, 76-meter (along with a helmet) tower of the church of St.. Catherine in the panorama – Gdańsk would not be itself. How much poorer would the sounds of the city be without the melody of the Cathar bells. The church is known as the Matrona Loci (mother of churches or mother of the city); its square at the base, the gothic tower is topped with a wide two-lantern cupola (early baroque with 1634 r.) with decorative corner turrets. The building looks particularly beautiful when viewed from the tower of another church – then the intricate architecture is clearly visible. Despite its height, it seems to be filigree, because it is overwhelmed by the bulky, disproportionately elongated body of the temple.

On weekdays, the interior of the church of St.. Catherine can only be admired from the porch, because the aisle – outside the hours of morning and evening services – are closed with a grate. The reason is the insufficient number of Carmelite priests who look after the temple and the repeated thefts of petty items in recent years., but the precious fragments of the altars. The church is open on Sundays and during service hours, monks can also be asked to allow sightseeing – the entrance to the monastery is at the rear of the building.

History of the church

Do 1342 r. the church was the only parish in Gdańsk and belonged to the prince, who decided on the choice of the parish priest. Here in the 13th century. the first great funeral ceremonies in the city took place, combined with exposing the corpse of the respected Duke Świętopełek II to the public, who during his lifetime gave Gdańsk city rights in 1240 r. and he brought Dominicans from Krakow. Katarzyna shared the fate of other Gdańsk churches, passing in the sixteenth century. from the hands of Catholics into the hands of Evangelicals, a 400 years later – burning in 1945 r. After the war, the current hosts took care of the complete reconstruction – Carmelites.

PICTURE OF GOD'S MOTHER OF BOLSHOWIAN

This picture, as the legend says, during the bloody battles with the Tatars in the 17th century. was fished out of the Dniester by the dog of Hetman Marcin Kazanowski. Hetman gave this unusual find to the Carmelites from Bołszowiec in the eastern borderlands. From then on, a portrait of a pensive Madonna, which the Carmelites brought to Gdańsk, he became famous for his miracles.

A large space with relatively few altars, paintings and other antique equipment, closed with raw walls, gives the impression of incompleteness and randomness of the interior of the church. You can start your tour from the nave, which will allow for a proper assessment of the size of the temple.

Walking through the middle, it is best to stop right in front of the presbytery, to be close to the finest elements of interior design. Above the main altar there is a painting by the outstanding Gdańsk painter, Antoni Molière,

Crucifixion with 1610 r. In the background of the biblical scene, the painter placed the panorama of Gdańsk with embankments and bastions and the Upland Gate. In the altar's predella there is another painting by the same artist, depicting the Last Supper.

After Molière's death, another famous Gdańsk painter completed the Crucifixion, Izaak van den Blocke, who is also the author of the three oval paintings on the top of the altar (in the center, the Resurrection, and on the sides the Descent of the Holy Spirit and the Ascension). Raising my head, you can admire the rainbow beam with the Crucifixion group with 1510 r., whose wooden figure of Christ, Mary's and John's faces are full of pain; they are best viewed from this very place. A little to the right of the altar is the tomb of the astronomer and councilor of Gdańsk – Jan Heweliusz. The sensational discovery of the tomb was made only in 1986 r.; today there is a tombstone here, a marble epitaph and fragments of the astronomer's coffin lid protected in a glass case, with well-preserved gilded letters.

A few steps to the right of the grave, between the central and southern aisles, stairs leading down to the baptistery allow you to plunge into the "darkness of the Middle Ages". In the crypt open to the public, you can see coffins carved in wooden logs, bones and objects of worship, found during excavations carried out in 1986 r. in the church of St.. Catherine, during which the tomb of Heweliusz and a pre-Slavic cemetery were found.

In the main nave, at the left pillar, there is an early Baroque pulpit from 1638 r. decorated with a bit faded, but with intricate bas-reliefs representing some scenes from the Gospel, like for example. these, when little Jesus is arguing with the scribes in the temple. In the front part of the southern aisle, two objects attract attention. The first is the golden altar with 1520 r. funded by the butchers' guild, depicting the kneeling Madonna surrounded by saints, whose beautiful and subtle face has been sculpted with extraordinary mastery. The second is the baptismal font from 1585 r. externally with rare precision inlays. In the southern chapel under the tower there are fragments of a Gothic fresco depicting the beheading of St.. Stanisław by Bolesław the Bold. Today, due to the passage of time, the painting is blurred.

Moving on to the north aisle from the main entrance, it is worth seeing the contemporary Way of the Cross, which deserves attention not so much because of its exceptional artistry, which due to the figure of Szymon Cyrenejczyk, whose face is a faithful image of the face of Lech Wałęsa. On the northern wall there is a painting of 1654 r. about dimensions 3 on 11 m entitled Entry of Christ into Jerusalem by Bartholomew Militz.

St.. Catherine also has its own wonderful painting. It is painted at the beginning of the 15th century. the image of Our Lady of Bołszowiec, hanging in a side chapel (on the left side) at the entrance to the church.

Songs of the silver bells

Composed of 37 carillon bells, Church and secular melodies ringing every hour from Katarzyna's tower, it is still an attraction today, and at the same time has a useful function – measures time, ringing on the hour. Formerly carillons sounding every hour from many churches in Gdańsk, they played different melodies at once. Carillons are percussion musical instruments composed of an ensemble of bells of various sizes, set in motion with the participation of a clock mechanism. They used to be a characteristic feature of Dutch church towers and town halls, calling out the melodies of bugle calls and songs.

The first carillon of the Church of St.. Catherine's bell rang in the 16th century. Expanded in the 18th century. it melted with the helmet of w 1905 r. due to a lightning strike. Five years later, the instrument was recreated, which, however, already in 1942 r. was taken to Lübeck as a spoil of war. Nowadays, the sounds of music resound from the church tower – thanks to the efforts of the Polish-German committee, which contributed to the founding of a new carillon in 1983 r.

It is worth planning your visit this way, to be here at. 13.00, when the sounds of the beautiful Oda resound to the joy of Beethoven. However, you have to go near the temple, for the song of the carillon of St.. Catherine is drowned out by the street noise and the ringing of bells from other churches.