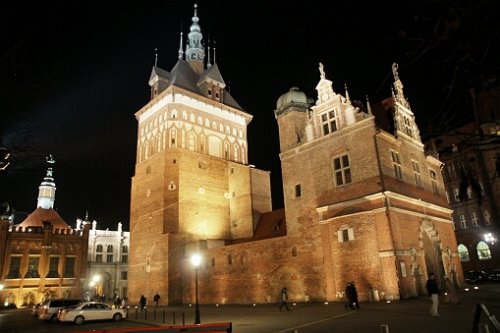 Just behind the Upland Gate, there is the Torture Chamber building and the high Prison Tower. Both of these objects, connected by walls, form a complex of a rectangular barbican that is unique in the world. From the point of view of the visitor, the concentration of so many important monuments so close to each other (right next to it is the Golden Gate and the Court of the Brotherhood of St.. George) it is convenient on the one hand, on the other hand, it is unfavorable, it is difficult to find such a point of observation, from which individual objects would be visible in all their glory (probably the best way to view them is from the large parking lot on the north side of the barbican). Watching this historic complex, you can try to explore the secrets of old architecture or wonder, for example,, how the royal retinue could squeeze through the narrow passage between the Torture Chamber and the Prison Tower.

Both in civil matters, as well as criminal justice in former Gdańsk belonged to the Ława (the so-called Second Ordynku) consisting of patricians, who were often accused of being biased and favoring the rich. During the trials, the parties appeared before lay judges in person or through their attorneys. The testimonies were recorded by the writer, and judgments could be appealed against to the Council. Most of the cases before the Jury concerned fights and quarrels. The latter were usually the domain of women, which, caught in an extremely loud and unrefined conversation, facedown in the stocks, so that they can continue their dispute at will, but without the possibility of maneuvers. There were also penalties for branding with hot iron, whipping, ear clipping or displaying in church (the delinquent had to stand in front of the main altar in white clothes and with a candle in his hand for, for example, three weeks). Prison conditions were harsh and ruthless, just like the ways of torture and like the times, in which the ideas of social rehabilitation have not even germinated and no one or anyone has dreamed of an ombudsman. The individual goals had their own names, such as “owl”, “duck”, “hare” or death row, baptized as “nory żmij” – do

which a convict was thrown in, and never – nor alive, nor the dead – He was not taken out of there anymore, leaving the body to be eaten by rats and worms. To, what's left of the wretch, were left for the company of successive convicts, The death penalty has been used frequently and in various ways – sheared, were hanged, were broken with a wheel, were burned at the stake. Only strangers and these were executed within the Torture Room and the Prison Tower, who came from lower social strata. Patricians and nobility had the privilege of dying at the Artus Court. Public sentences and the accompanying long ceremonies were a great attraction for the sensationalist bourgeois audience, among which there were many mothers with children, old people and adolescent girls. Let's not forget, that we are talking about a time far ahead of cinema, television and video. Criminals with style – just like today – there were few. The robber Matterna was one of the most famous – the terror of 16th-century merchants and brothers Charles and Claude de Hetot, seasoned counterfeiters of ducats. The execution was always carried out by the city executioner. He was an unsympathetic figure and, due to his profession, doomed to loneliness and ostracism. He had no public rights, he could only live in Torture Chamber and even in a church he would sit on a bench specially designated for him. For a 16th-century citizen of Gdańsk, rubbing against a black executioner's coat on the street heralded such a misfortune, what the meeting of the herd may predict today 13 black cats in monastic habits and glasses.

The torture chamber and the prison tower were built in the 14th century. Previously, a gate with two towers stood in this place, insuring the old one, because coming from 1346 r. the Long Street Gate (today Złota). They were preserved after them – on the north and south sides – fillets in the Torture Chamber wall. After the erection in the 16th century. the western fortifications in the form of ramparts, the moats and the Upland Gate, the modest gate with two towers lost its defensive significance and went into the service of the dimension

justice. With time, the moats and walls between the Prison Tower and the Golden Gate were removed. W 1587 r. Antoni van Obberghen rebuilt the building in accordance with the spirit of the Renaissance. The roof of the Torture Chamber has been strengthened and decorated with stone ornaments; at the top of the building there are four figures of city guards. The Prison Tower was raised by two storeys and decorated with an impressive cupola (reconstructed at the beginning of the years 90. XX w.).

The former gate complex began to serve other purposes for a year 1604 r., when the pillory was moved from the Main Town Hall and attached to the eastern wall of the Prison Tower – it is shown with the remnants of the chain at the northeast corner. The equipment also included stocks and a gallows in the place of today's Coal Market. After the Second Partition of Poland, the Prussian authorities did not change the character of the Prison Tower and Torture Chamber – at that time, those sentenced to forced labor were held there. From the end of the 19th century. the building had other functions: Museum, the seat of the Association of Gdańsk Artists, Red Cross columns, and even the Hitler Youth club. During the occupation years, a temporary camp for Polish women was also established here. The war damage largely affected the roofs, gables and interiors of both objects. However, the renovation works carried out brought them back to their former appearance.