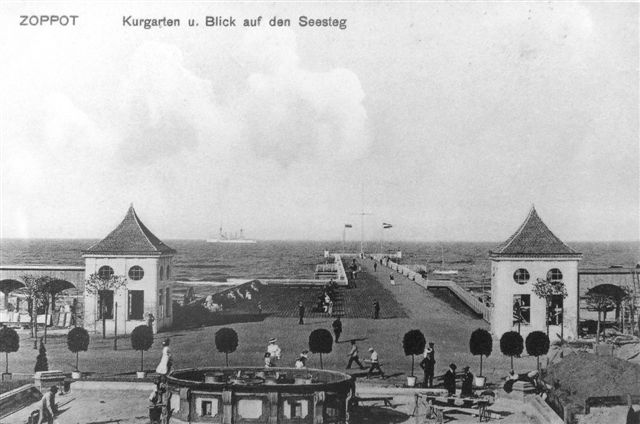 In the distant Iron Age, ok. 650-400 years BC, the population of the East Pomeranian culture lived in the area of ​​today's Sopot, considered by some researchers to be Proto-Slavs. Finds from that period are collected in the Gdańsk archaeological museum; among them are extremely ashtrays, that is, vessels intended for the ashes of a burnt corpse, with the faces of men and women carved around the neck. The early Middle Ages left behind fragments of a wooden and earth fortified structure, called the settlement (at today's ul. Haffnera). The history of Sopot becomes a bit clearer only from the 13th century., When is it, as is clear from source materials, the then reigning prince Mściwoj II transferred the village to the Cistercian monastery from Oliwa.

Lasting approx 150 years, the reign of the Teutonic Knights temporarily deprived the Cistercians of rights to the village. W XVI i XVII w., with the permission of the monks, The richest and most influential Gdańsk patricians started to build summer residences here – as per the requirements of the respawn mod. Year 1660 and Polish-Swedish relations turned Europe's eyes to Sopot for the first time, where Swedish deputies participating in peace negotiations lived and conducted diplomatic activities. Years of the Napoleonic Wars, the conflicts between Prussia and the Free Town did not have a positive effect on the condition of the hitherto luxurious holiday village – many mansions and houses were burned down, a Prusakom, who came here after the Second Partition of 1793 r., it did not care about their rebuilding.

Everything pointed to it, that Sopot will again become a meaningless village, Fortunately, however, subsequent owners from the Przebendowski family discovered the healing properties of the local sea waters. The first baths for health were perceived by local fishermen as a scandalous practice of the state. Busy villagers, who were unfamiliar with the works of John Locke and Jean Jacob Rousseau, they persisted in the common belief, that sea baths not only do not help, but they even harm.

Jean George Haffner played a great role in the history of Sopot, a French military doctor arrived in Pomerania with the Napoleonic army in 1808 r. He appreciated both the favorable climate and the location of Sopot, as well as the beauty of Gdańsk women. As the husband of the widow of Regina Boether, he settled here permanently, conducting medical practice. Thanks to Haffner, real bathrooms were created, pier, source houses, will. Doctors began to recommend sea air and baths to their patients more and more. W 1824 r. The first street names and property numbering appeared in Sopot. Still in 1819 r. they were only here 23 houses and 307 residents, a w 1902 r., when the Berlin authorities granted Sopot city rights, he counted 10 thousand. inhabitants and was admitted annually 12,5 thousand. patients. A breakthrough event for the development of the resort was the opening of the railway line connecting the city with Gdańsk. At the beginning of our century, Sopot was expanded! it became a real resort town. Before World War I, it was referred to as Weltbaden – world bathing beach – and it wasn't just a compliment. During the period of the Free City of Gdańsk, Sopot was part of it, as an urban district. It was then very popular among patients; Famous and rich Poles came here regularly. Not only the bathing beach was a magnet, but also the most famous casino on the Baltic Sea in the Grand Hotel,! from which the unlucky losers had only a few steps to the pier, called in the years 20. "Suicide bridge". She was unmatched on tennis courts, as was said, actress Jadwiga Andrzejewska, and roulette was played by the poet Maria Pawlikowska-Jasnorzewska. Existing since 1909 r. The Summer Opera made the city famous thanks to its famous Wagner festivals.

During the occupation, Sopot fell silent and turned gray, and the only patients were wounded German soldiers, convalescing here. After the war, the town began to function as a resort again. From former residents (w 1938 r. among 31 thousand. inhabitants were 21 thousand. Poles, mostly Kashubians) very few remain. The Sopot Germans left the city, and in their place came Poles from the eastern borderlands. Sopot began to gain recognition on a European scale from 1961 r., when the 1st International Song Festival was organized.

This entry was posted in Information and tagged guide, Sopot. Bookmark the permalink.