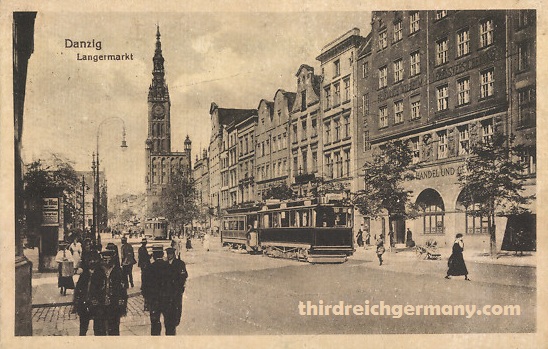 In the case of Gdańsk, it is a specific mixture of descendants of people who came here for 1945 r. from all over Poland, from Kashubia and the east, whose moderate local patriotism allows them to tolerate strangers and does not smack of chauvinism or provincialism.

The city is discovered in three stages. The first is Śródmieście, that is the area between the railway line and the Motława arms, where the oldest and most important monuments of old Gdańsk are concentrated. Tourists come here first, and this is where the inhabitants of Gdańsk go for a walk. The second stage is Wrzeszcz – a district that is fascinating in its own way, where the new mixes with the old, and next to traditional communist interiors and décors, European fashions and Western trends are becoming more and more bold. Visiting Wrzeszcz on your own, you can come across interesting phenomena and objects not usually described in guidebooks. The third stage is Oliwa – a mecca for organ music lovers – beautiful green, hilly landscapes tempting with freshness in spring and dazzling with the richness of colors in autumn. Industrial factories, outside the shipyard and port, rather, they scare you away, as do gigantic housing estates on the outskirts of the city – ugly, great, bringing to mind the lunar landscape.

The area of ​​the city is over 260 km2. He lives here over 460 thousands of people. It is in it 6 universities: University of Gdansk, Medical academy, Gdańsk University of Technology, Academy of Physical Education, Academy of Music and College of Fine Arts.

Gdańsk has always been special. It was here that the rule of the bourgeois and merchant patricians was formed, caring for the city more than the Republic of Poland. On the basis of the trends in force in subsequent epochs, Gdańsk developed its art, fashion and style, which manifests itself in all areas of life. Today, tourists are most attracted to objects and objects related to the "golden age" of the stronghold on the Motława River. In recent history, Gdańsk has played the role of a place at least twice, from which something important comes from. First, in years 60., he created great artists associated with the Bim Bom theater – Kobielę, Fedorowicz, Cybulski and others, and in years 70. i 80. it was here that groundbreaking political and social changes were initiated, which led to the collapse of communist rule in Poland. Lech Wałęsa comes from Gdańsk, Father Henryk Jankowski, Marian Krzaklewski, many liberals from the Freedom Union and other contemporary political and social activists. In years 90. Gdańsk did not allow itself to be pushed into a symbolic role: in the summer, young people hungry for the sea and freedom come here from all over the country and abroad. The annual Dominican Fair provides similar impressions as medieval indulgences, and what better places host seafarers from all over the world. For centuries, this bustling port city has offered unknown goods and all kinds of news. In Gdańsk, the weather is never indifferent, it always takes some specific form: when it blows – it's to break your head off, jak pada – it's all over, and how the sun shines – everything becomes incredibly beautiful. Emotional relationship to Gdańsk, just like the aura, he cannot be indifferent either; no one will say goodbye: "Well, city, like a city ".

The climate of Gdańsk

It can be described briefly as windy, humid and with frequent changes in temperature. There are microclimates here: coastal strip, the delta plain of the Vistula and the uplands.

The climate on the coast is very different from this, which prevails in central Poland or in the mountains. It is shaped mainly by the maritime climate, that is, large masses of air flowing in from the Atlantic and is consequently milder. The winters are warmer, but years for it – unfortunately cooler, for the sea acts as a thermostat. In winter there is seldom much snowfall. By the sea, As you know, the weather changes more often: the sun can shine beautifully for a few days, and then suddenly she starts drizzling (the average rainfall is higher than inland). Fogs and drizzle occur most often in summer and autumn. Most sunny days occur between May and August, but it's better not to overdo it with laying your cake on the beach. Therefore, preventive tourists should take both sunscreen and sunscreen to the seaside, as well as a raincoat and a scarf.

The word amber comes from the German Brennenstein, which means a burning stone. In Old Polish it was called amber. Amber was valued in ancient times. The Greeks called him the electron, and because when rubbed it attracts scraps of paper, so centuries after this word was coined the term electricity. The Romans made jewelry from this fossil resin, ornaments, statuettes and amulets for gladiators. In the times of Nero, golden amber was the most fashionable, reminiscent of the hair color of the Emperor's beloved wife. Jantar was also used to treat eye and stomach diseases. Today amber ointment, and even better tincture on amber is used against pains "in the bones". The famous amber route led from Gdańsk Pomerania, via Kalisz to Ancient Rome. Perhaps at that time there were "amber paths" in Western Pomerania”, but large amounts of amber have never been found here. At the beginning of the 14th century. the first guilds of amber craftsmen in Bruges and Lübeck were established, and a hundred years later in Gdańsk, Słupsk, Elbląg and Królewiec.

Amber, much older than the Baltic Sea itself, arose more or less 40 million years ago. It is the resin of some conifer from those times, about which little is known. It consists largely of carbon (79%), and also from oxygen, hydrogen and a little sulfur. Its color and degree of transparency depend on microscopic air bubbles – the more of them, the more matte amber is. White ambers contain a large amount of extremely small bubbles. Sometimes there are nuggets with embedded creatures or plants – thanks to these finds, it is possible to at least partially recreate the mysterious world of the Tertiary.

For ambers (or – as the Kashubians say – "On the way") you have to go after the storm, but only after that, during which the northeastern winds blew. It's best to collect at four or five in the morning: first, then everyone else can be run away, secondly – with a flashlight, it is easier to find the desired amber, which unlike ordinary pebbles, reflects light. A night escapade (especially on the beach in Stogi) however, it is risky in so far, that you can come across groups of gangster-gatherers that are dangerous to the competition, methodically excavating dunes. In the sun, amber shines slightly and is lighter than stones or glass of the same size. The most common tiny nuggets, however, are difficult to distinguish from pebbles, so to "confirm" the authenticity of the find, it's best to rub it on wool and check it, whether it attracts scraps of paper.

“There are many types of amber. Among them, the best fragrance is white. Red varieties are highly valued, but only then, when their light is not too strong. They like them, which are like fire, not being him. Falerna amber is the most popular, having the color of wine and so named after him. Transparent, has a gentle glow, it can also enjoy a shade of brewed honey.” – Pliny the Elder, Natural History.