By the Baltic Sea 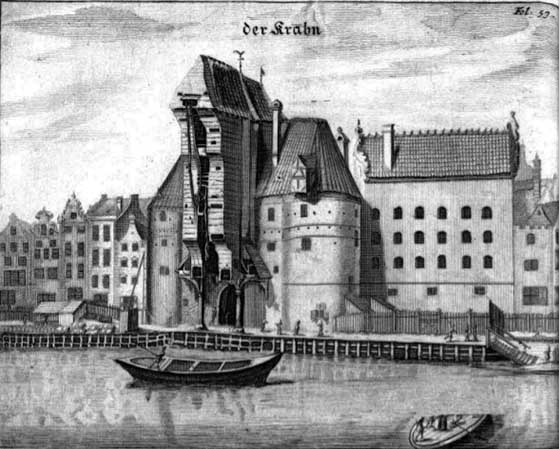 A cruise on a ship of the "white fleet" allows you to see the Gdańsk port with the Wisłoujście Fortress and Westerplatte. Right next to the Crane, there is a ticket office and a marina on the Long Embankment, where the promenades with guides depart from, plying to Westerplatte and back. Regardless of the weather, a trip by water is a great attraction; at the beginning of the cruise, you can see the buildings on the Motława River from an interesting perspective, and among them only from this distance, the ruins of the Teutonic castle, visible in all their glory (on the left side). Standing opposite, unchanged for several decades, fish factory workers' cottages, they give an idea of ​​the miserable existence of Gdańsk workers. From the ship, you can perfectly see the Gdańsk Shipyard on the right. Everything is great there; built and renovated ships with hulls like houses, sky-high cranes, scaffolding and other devices, where shipbuilders look like ants.

The old port of medieval Gdańsk was developed from the beginning of the 14th century. on the Motława River, between today's Długa Pobrzeże and the islands of Granaries and Ołowianka. Its busiest part was the section between the Green Gate and the Swan Tower. The first caravels flowed here, great masters, transhipment and trade took place here. W XVIII w. the port began its expansion beyond the Motława River: first to the area of ​​today's Port Channel (behind Wisłoujście), and then the Leniwka canal. At the end of the 19th century. The Władysław IV Canal was deepened. In the interwar period, the port was managed by the Port and Water Roads Council, which included five representatives of Poland and as many Germans as well as the president of the Council. If the representatives of both countries could not come to an agreement, the case was decided by the president. When Gdańsk returned to Poland after the war, and special operational groups removed shipwrecks sunk by the Germans at the entrance to the port, the port has started working. The docks were deepened and the Five Whistles Turn between Wisłoujście and Westerplatte was widened, so named because, that the ships passing through were giving up 5 sound signals. On a cruise around the port, you can see ships under different flags, as well as smaller tugs and support vessels.

When the sense of smell sends a warning signal to the brain during a voyage, it means, that we pass the Gdańsk Phosphorus Fertilizer Factory on the right – the great polluter of the environment. Further, also on the right, the white tower of the Wisłoujście Fortress overflows, which can be reached from Westerplatte or by bus #106 departing to Westerplatte from the Main Railway Station (it is quite a long way). Tourist ships do not stop near this extremely interesting sea stronghold, one of a kind in Poland.

The structure is round, a brick tower with a height of approx. 20 m, erected in the 15th century. on the site of the Teutonic fortress demolished by the Hussites, to 1758 r. served as a lighthouse. A breakwater led to the sea from her feet, which from the north and north-east protected the entrance to the Vistula against waves. In those days, a thick chain was pulled across the Vistula, which was only abandoned then, when a ship entering the port showed its loads and paid the duty. Just in case, armed galleys ready for intervention were hidden in the sheltered moats of the fortress. Over time, the fortress was rebuilt, it was strengthened and renovated after numerous attacks. W XVI w. the tower was surrounded by a fortress wall, a w XVII w. barracks were added. Wisłoujście took part in almost all fights for Gdańsk. Stefan Batory and the Swedish invaders stormed it, it was fought here during the times of Stanisław Leszczyński and the Napoleonic Wars. It also served as a strict Prussian prison, in which the Prussians imprisoned, among others, Polish insurgents from 1830 r. i 1863 r. Particularly serious damage to the fortress was made in 1945 r., when artillery shells smashed the tower and barracks. Up to years 60. ruins, destroyed by vandals, were waiting for renovation.

The Wisłoujście Fortress consists of a narrow, light tower without a helmet (a fire once burned on its top), surrounded by a ring of compact red brick tenement houses. Climbing the tower with the winding stairs is a bit tiring, but the reward is a beautiful view of the harbor and its surroundings. Apart from the sea route or the route from Westerplatte, Wisłoujście can be reached by car via Majora Sucharskiego Street. The facility belongs to the Museum of the City of Gdańsk, who still cannot afford to renovate the tower systematically destroyed by vandals. Unattended, the fortress is the favorite haven of port bums, therefore it is not safe to visit it alone, leave a car with her, or to look at night even in larger company. If MMG manages to turn Wisłoujście into a typical museum facility, it will be available to tourists from. 10.00-16.00.

Behind the fortress on the right quay there are huge piles of wooden logs, mainly from Polish forests, waiting to be exported – mainly to the Scandinavian countries. On the left side you can see Nowy Port – district founded in the 18th century. by the Prusaks, and today built up with modern blocks.